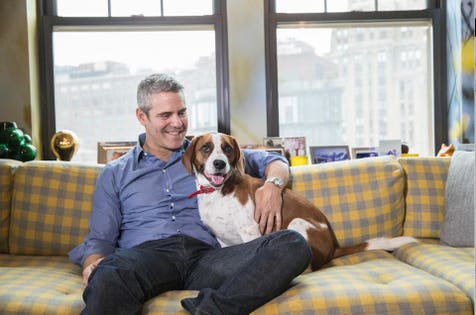 Life at home for Bravo’s Andy Cohen is far less dramatic than it is for any Real Housewife. But that doesn’t mean it’s boring. In February 2019, his son Benjamin Allen Cohen was born via surrogate. The first time father was already a fur-parent to Wacha, a now senior beagle he rescued through Petfinder. I recently spoke with the Watch What Happens Live host about how his life at home changed this year and what he really thinks about the homes of Real Housewives.

A Beagle And A Baby In A Bachelor Pad

Cohen’s West Village duplex is a combination of three apartments, located in a seventeen story co-op built circa 1931 by famed architects Bing & Bing. After buying his first apartment in 2003, he purchased the unit above him several years ago. So, while the issue of space, especially in New York City, wasn’t something he would need to tackle—bringing a new baby home would still require a great deal of planning.

But, one thing that Cohen would have to prepare for was introducing Wacha and Ben. “Ben was born in LA and Wacha was staying in Brooklyn at his dog walker’s apartment,” he tells me. “I got Ben situated here and after a week of us being at home [and settling into a routine], I brought Wacha back into the house. I didn’t make a big deal out of the fact that there’s a baby here. I let Wacha figure it out and acted normal about it. They both found their way.”

The new dad soon learned following his own intuition was best. “I didn’t listen to any advice just kind of figured it out on my own,” he says.

While many parents go overboard re-decorating their homes and setting up a sugary sweet nursery, Cohen’s approach was low key, simply choosing to covert his guest room. He swapped out the grownup furniture for a crib, glider and other essential pieces from DucDuc, staying with the same sophisticated and modern motif. “I wound up keeping the same wallpaper I already had in my guest room. It’s this beautiful photographic wallpaper of a sunset over an ocean. I didn’t go crazy,” he shares.

However, that doesn’t mean Cohen won’t re-decorate in the future. As someone who clearly appreciates design, he simply wants to make his son a part of the process. “I don’t know what he likes yet. He’ll grow up and tell me what he likes. So, [right now] I have some really nice furniture in there. [The space is] super practical and full of baby gifts. There are lots of stuffed animals.”

Cohen’s home is currently set up to meet both his and Wacha’s needs. “I choose fabrics for my living space, all the couches, etc, that were durable and my dog could lay on,” he says. “I let Wacha sit on all the couches, he sleeps with me. I wanted it to be livable and comfortable not only for me, but also for the dog. In terms of the baby, more is going to change.”

This is because at seven months, Ben is getting ready to start crawling. So a thorough baby proofing is inevitable in the very near future. As Ben hits his milestones, it also means that Wacha is going to have to keep up (or possibly need to run away) from his little brother, which is something else Cohen is planning for.

According to a survey from Purina, like 83% of dog owners, he didn’t realize that seven-year-old Wacha was a senior dog. “I took the 21 Day Challenge and switched to Purina One Vibrant Maturity. So, now his energy is really high.” The beagle will be jumping over baby gates soon enough.

“I don’t understand the concept of renting at all,” Cohen confesses. “It’s just throwing money away. Especially a huge home. I don’t get it.”

However, he believes there is one exception to the rule. “I guess I can understand renting a little pied-à-terre in the city.”

As for his favorite Real Housewife homes, some of them include Bethenny Frankel’s apartment and Hamptons house, as well as Luann de Lesseps’ Hamptons home. As for the West Coast, Cohen says wouldn’t mind living in Teddy Mellencamp’s modern abode.