The Netflix logo is seen on a mobile phone.

What a difference the past two months made for Netflix.

It was just early July when the streaming video giant’s stock was flirting with new record highs. Now after an unexpected loss of subscribers and increased competition in the streaming war, shares of Netflix erased all of its 46% gain for the year at its peak and officially entered negative territory on Monday. 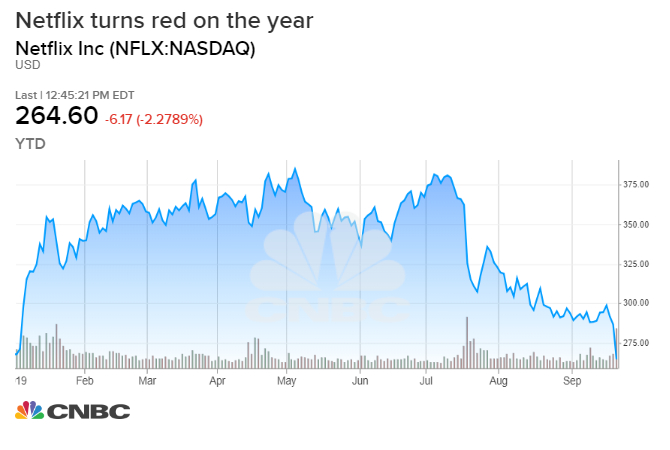 Netflix has been haunted by nonstop bad news in the past few months. First, its most popular show “The Office” was stripped from its platform by NBC. Then, Netflix was hit by a rare loss in U.S. subscribers and a large miss on international subscriber adds in the second quarter, which sent the stock plunging and suffering its longest losing streak in five years.

A slew of announcements from media companies launching their own streaming services — Apple, Disney, AT&T‘s WarnerMedia, NBC — came as a last straw for the struggling stock.

Some Wall Street analysts started losing faith in their darling stock. Barclays analyst Kannan Venkateshwar said Monday Netflix is “very expensive” under a new valuation framework for growth companies as Netflix needs millions more subscribers than it can get.

Most of Netflix’s gains for 2019 came from a big pop in January when the company flexed its pricing power. It raised prices by 13% to 18% then and the stock soared. In a more crowded streaming space today, hiking prices may not be so welcomed by investors again.

The newcomers are already winning in terms of pricing. Apple announced its original TV service will cost $4.99 a month, while Disney will offer high definition streaming as part of its standard $6.99 plan for its new Disney+ channel. Netflix’s basic plan in the U.S. is at $8.99 per month.

Wall Street analysts haven’t given up on one of their favorite stocks, however. Of the 39 analysts covering Netflix, 28 have a buy rating, nine recommend holding the stock while two have a sell ratings, according to FactSet.

Piper Jaffray last week recommended buying the dip in the stock, while Credit Suisse recently praised the positive numbers from app downloads and a stellar slate of original content coming out of Netflix.

Disclosure: NBC is part of NBCUniversal, the parent company of CNBC.