Stocks so far are shrugging off risks that President Donald Trump could be impeached, but investors may be betting that if he is, the market will ultimately rally, the way it did in the Clinton era.

On Tuesday, House Speaker Nancy Pelosi announced that the House would investigate impeaching Trump for seeking help from the president of the Ukraine in gathering dirt on Democratic presidential candidate, Joe Biden and his son.

The idea of impeachment was initially a negative for stocks, which sold off Tuesday as investors anticipated Pelosi’s 5 p.m. announcement. Stocks were mixed in early trading Wednesday but came off lows when a memo of Trump’s conversation with Ukraine’s president did not show that Trump threatened to withhold aid from Ukraine.

The House could impeach Trump, as it did Clinton, but it is unlikely the Senate will go along with it.

“The Senate is just going to ignore it,” said Jack Ablin, CIO at Cresset Wealth Advisors. “It’s probably at worst a distraction. I really don’t think investors will take the risk of impeachment seriously at this point. If there’s really strong damning evidence, that’s a different matter.”

Because Trump’s comments and behavior on the trade front have been so influential on the market, the ups and downs of the impeachment inquiry could also show up in the prices of stocks and other assets that move on trade-related headlines.

When the memo was released, stocks came off their lows, gold came off its highs, and bond yields moved higher. Yields move opposite price. But within the hour, Trump made bullish comments about making a trade deal with China, and stocks rallied sharply, bond yields rose and gold fell.

Semiconductors, which have been tied to China trade, moved higher, and the SMH VanEck Vecotrs Semiconductor ETF was up about 1.1%. Cyclicals, led by financials and industrials were the best performers Wednesday.

Strategas policy analysts Dan Clifton said on the trade front, the new trade deal with Mexico and Canada will probably now be at even more risk, since Democrats are unlikely to agree to it. But there could be a swifter movement on China, and Trump now is more likely to accept a smaller deal, putting aside some of the thornier issues. That would be good for industrial stocks, semiconductors and those assets impacted by a positive trade outcome, like energy and other commodities.

“The president’s approval rating has been tied to better news on China trade over the last year and a half,” said Clifton, adding it would improve confidence if Trump were to solve some trade conflicts with China. “He needs to govern and start showing accomplishments. China is the best way for him to do that,” he said.

Strategists have been pointing to the impeachment of President Bill Clinton as being most similar to current events, if the House does impeach Trump. Clinton was impeached by the House of Representatives but immediately acquitted by the Senate in February, 1999. The S&P 500 rallied 28% from January, 1998, as the the first reports of Clinton’s affair with White House intern Monica Lewinsky emerged, through the Senate acquittal, according to Bespoke. 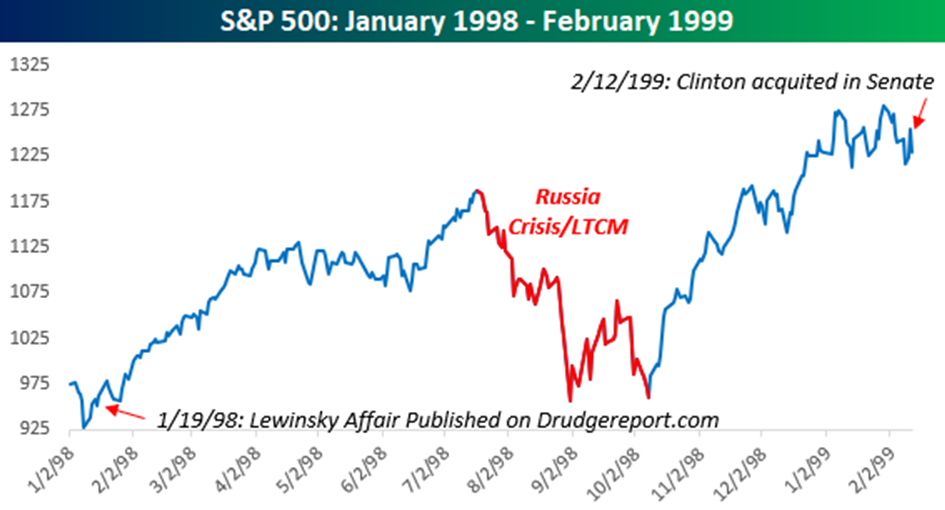 “Sure, there was a decline of 20% at one point in between, but that was due to the Russia Crisis and the collapse of Long-Term Capital rather than anything to do with what was going on in the White House,” notes Bespoke co-founder Paul Hickey.

That contrasts with a weak market when President Richard Nixon was being investigated for Watergate, but he resigned before Congress could impeach him. LPL Financial found that the S&P was 39.2% higher a year after the impeachment process began against Clinton, and was down 33.4% a year after proceedings were started again Nixon.

Hickey said an important distinction was that the economy was in far worse shape when Nixon was in the White House during the early 1970s.

In the bond market, the 10-year Treasury yield moved lower Tuesday and Wednesday, then higher and was at 1.70%, just 2 basis points below Monday’s level.

“We look for markets to continue undergoing a mild risk-off episode as investors and traders digest the news that the impeachment investigation is under way. The 10yr Treasury has rallied very slightly – call it 1-2bps — since late Sep. 24, when the possibility of impeachment gathered steam,” noted Michael Schumacher, Wells Fargo, director, rates strategy.
“We guesstimate the ‘impeachment effect’ is good for another 5-10bps rally in 10s could happen.”

But if Trump is cleared in an acquittal, the move could more than reverse.

“The 10-year Treasury yield rose about 50bps in less than two months from the date Mr. Clinton was impeached to the day the Senate acquitted him. A 50bps move seems too aggressive in the 2019 world of low yields, but we think a 20-25bps move could happen,” noted Schumacher.

J.P. Morgan strategists said, in a note, that they would not change their overall investment recommendations, which are moderately cyclical, due to prior geopolitical and political impacts on business and profits.

They are overweight stocks versus fixed income, and overweight U.S. equities versus non-U.S. stocks. They are overweight a couple of cyclical sectors—technology and discretionary. They are also overweight part of the emerging markets complex, and are long hedges against recession and geopolitics, including Japanese yen, gold and some energy assets.

The J.P. Morgan analysts said further impacts on markets will be determined by what happens in three 2020 races for the White House, Senate and House, and the impeachment process could influence that depending on what happens.

“The range of scenarios won’t narrow until Democratic primaries in Q1/Q2 2020 make the Democratic nominee clearer. So definitely an issue worth thinking about, but not an issue worth investing or hedging around yet,” they noted.

On the international front, there is a chance Trump will be more conciliatory to help his approval rating.

“Trump’s rating starts this process near a cycle high of about 45% …The pessimistic view is that other countries will compound the President’s domestic challenges with international ones in hopes of scuppering his re-election bid,” the J.P. Morgan analysts wrote, pointing to the 1979 hostage crisis that put Republican Ronald Reagan in the White House and thwarted Jimmy Carter’s re-election.

Instead of moving towards a deal, one “can easily imagine gradual escalations of the US-Mainland China trade war, if China slow-walks negotiations and triggers another tariff hike on the assumption that its regime can manage another year of economic stress, but Trump cannot,” they wrote. “With Iran, escalation can come through another provocation in the Gulf.”