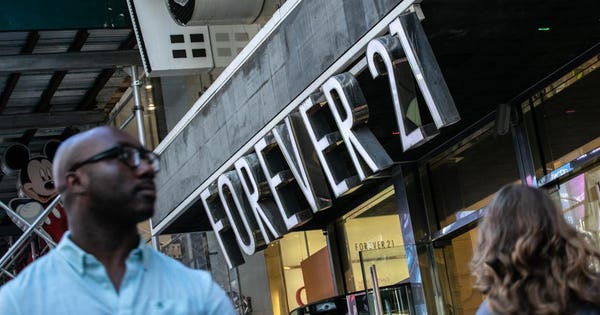 A couple of weeks ago when rumors started to circulate that Forever 21 might be seeking bankruptcy protection I wrote about what, in my opinion, went wrong with the once fast-growing retailer and how others could avoid a similar fate.
In the last 24 hours, the news has broken the company has now filed for Chapter 11 bankruptcy protection in the US. During this process, the company has outlined plans to reduce its number of stores from nearly 800 to somewhere in the 450-500 range.
Alongside this, the business has also announced that it has secured $275m in financing from existing lenders and $75m in fresh equity investment from TPG Sixth Street Partners.

Executive vice president Linda Chang described the moves as an “important and necessary step to secure the future of our company, which will enable us to reorganize our business and reposition Forever 21”.
In reality though, what do these steps mean for Forever 21 and what does their new strategy likely look like?

Refocus on the US Market

Whilst the retailer has not yet announced which stores will be closed there is a strong expectation that they will focus on international locations with the business expected to pull out of Europe, Canada, Asia, and most South American markets entirely. The business has already reduced its store presence in the UK market in recent times–a nod to the increased youth retailer competition in this territory. It’s this increased competition that should be causing worry for Forever 21 still–the youth market has become increasingly crowded in recent years and the barrier to entry is always reducing. It seems like a new youth-focused brand appears every day currently, often the brainchild of someone with a large social media following to turbocharge early growth.

By focusing the business just back on the home US market the strategy is clear to remove anything that isn’t revenue-generating from the business and get closer to the original customer again.

Whilst the vast majority of retailers were focusing on their digital offering Forever 21 held with their belief in malls and offline retail. The steps not taken show this strategy changing and a focus being placed on digital sales and not large expensive stores – which work well when sales are high but quickly become a break a business model.
It’s hard to turn a profit on the low-value products that Forever 21 sells online but for success with a youth demographic in 2019 it’s vital. Topshop in the UK has faced similar problems and has resulted in similar results.

With increased competition, Forever 21 has been fighting a battle to keep hold of the youth market and sadly failing. Ariana Grande though has started a lawsuit against the brand claiming they used her likeness to promote their products after talks about a partnership broke down. The company has to harness the cool factor with young consumers if it’s to return to profit and growth.
Despite this step and the issues that come with bankruptcy protection Forever 21 is still an important player in the global retail market and was a leader in the fast fashion market – the company has been overtaken by online-only rivals but the opportunity to reset the business and reclaim it’s former glories now presents itself again.