Here are the most important things to know about Wednesday before you hit the door.

We’ll get a first reading on the strength of the labor market on Wednesday with private payroll data from ADP for September coming out at 8:15 a.m. Economists surveyed by Dow Jones are estimating 125,000 jobs added in September, down from 195,000 created in August.

Wednesday’s ADP job count comes ahead of Friday’s more closely watched Labor Department nonfarm payrolls report. A robust job market could curb investors fears that the U.S. economy may be slipping into a recession. Data on Tuesday showing the weakest manufacturing activity in a decade knocked the stock market.

A slew of automakers are set to report auto sales numbers on Wednesday. Toyota and Hyundai Motors reported a large slump in September sales on Tuesday, largely attributed to the Labor Day falling in August instead of September.

October, historically the most volatile month of the year for stocks, is already living up to its name.

Stocks, along with bonds and the dollar, dropped on Tuesday after that weak manufacturing report fueled worries over the U.S. economy. However, stocks could turn around on hopes that a meeting between the U.S. and China next week could improve the trade deal outlook. 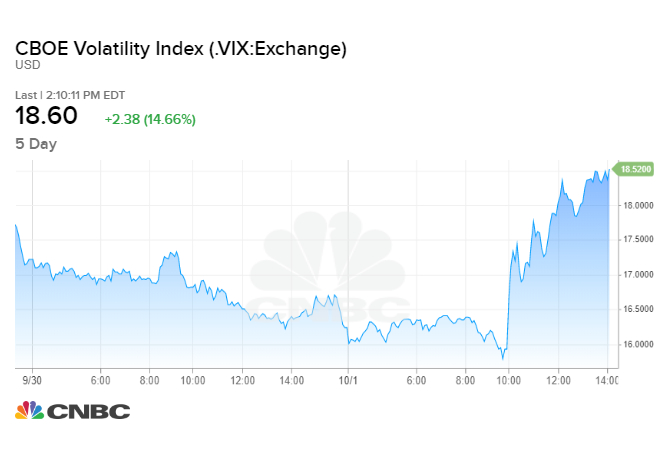 The Cbeo Volatility index, or the fear gauge of investors, already spiked above 18 points on Tuesday.

Lennar (before the bell)

Bed Bath & Beyond (after the bell)