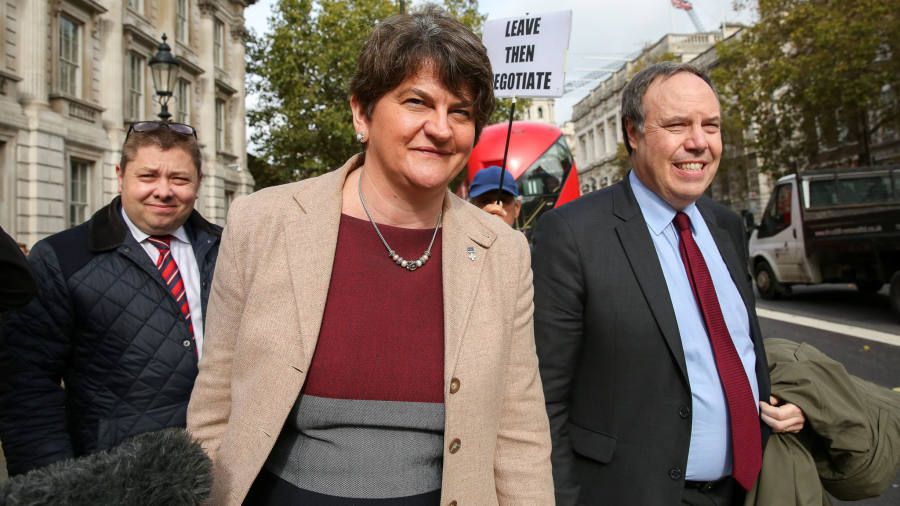 Boris Johnson would prefer to govern in poetry, but on Wednesday he was given a stark reminder, as he tried to push a Brexit deal over the line, that he had no alternative but to govern in prose.

“We are not quite at the summit,” he told Conservative MPs in a five-minute speech in a crowded Westminster committee room at 4.30pm. “We are at the Hillary Step. The summit is not far away, but at the moment there is cloud at the top.”

Mr Johnson’s lofty rhetoric, referencing what used to be the last major challenge on an ascent of Everest, was far removed from the tense, technical and grinding talks that he held throughout the previous 24 hours with Northern Ireland’s Democratic Unionist party — now the biggest single obstacle to a Brexit deal.

Talks between Mr Johnson and Arlene Foster, the DUP leader, on Tuesday night were fraught, as she warned during a meeting lasting more than 90 minutes that she could not support the compromise deal mooted by the prime minister.

Downing Street staffers anxiously watched their television screens as Mrs Foster left Number 10, praying that the DUP leader would not make an intemperate statement to waiting camera crews. There was relief when she walked down the street tight-lipped.

“There is no sugarcoating in Downing Street of what happened,” said one person close to the talks. “It did not go well.” Another Number 10 staffer said the unionist party — notoriously tough negotiators — were “a bloody nightmare”.

European Council president Donald Tusk tweeted: “Yesterday evening I was ready to bet that it’s all set and agreed, today there are certain doubts on the British side.”

[It is] not axiomatic we will follow whatever the DUP do

Mrs Foster and Nigel Dodds, her deputy leader, made it clear to Mr Johnson that they were unhappy with his plan to create a customs border between Great Britain and Northern Ireland, but they could live with it under one condition.

They insisted that the deal had to be approved by the Stormont assembly with cross-community support — the idea enshrined in the Good Friday peace agreement that sensitive issues must be passed by both nationalist and unionist communities.

This amounted to a veto for the DUP, something that Dublin — and therefore the EU — would not accept. On Wednesday morning, Mr Johnson called Leo Varadkar, his Irish counterpart, to propose a new solution.

Mr Johnson proposed that the “consent” principle could be expressed instead through a simple majority vote at Stormont, the Belfast assembly that has been suspended for almost three years because of cross-party disagreement.

A bullish British prime minister felt confident this would be approved by the DUP, thanks to the overall unionist majority in Northern Ireland. Mr Varadkar indicated his assent during a short phone call and a deal seemed possible.

But it was not enough for some in the DUP, who feared that it was possible that — if Stormont were reconstituted — the party could be outvoted by a combination of Sinn Féin and other parties.

Sammy Wilson, the party’s hardline Brexit spokesman, reiterated the case for the de facto veto on the deal, saying any decision at Stormont had to come “not just from a majority vote but from a cross-community vote”, otherwise it would breach the Good Friday Agreement.

In Number 10 it was clear the DUP would need more wooing and yet more detailed work on the biggest single sticking point to a deal.

But on other fronts there were much more positive signals. The hardline European Research Group of Conservative Eurosceptic MPs indicated that it was prepared to support the outline deal, in spite of the new barriers to trade between Great Britain and Northern Ireland.

Mark Francois, a vice-chairman of the ERG, said that while his members were “strong allies” of the DUP, it was “not axiomatic we will follow whatever the DUP do”.

Mr Johnson’s allies believe that when a Brexit deal finally comes before the Commons — possibly on Saturday — around 25 of the 28 ERG MPs who opposed Theresa May’s deal last March could support the new plan.

In Brussels David Frost, Mr Johnson’s chief negotiator, was briefed by Number 10 that while a deal was close, the DUP’s support was not in the bag. Talks dragged on into the afternoon to try to resolve the “consent” issue.

Although the DUP insisted it was not haggling over money for Northern Ireland as a condition for its support, Mr Johnson has promised a “New Deal” for the region which is expected to cost the British taxpayer hundreds of millions of pounds.

“Another difficult night in prospect for HM Treasury,” tweeted Nick Macpherson, former permanent secretary at the Treasury. “Every PM I worked under sought to answer the Irish question. And, whether or not they succeeded, the prospective deal required up front many millions, sometimes billions, of cash. #dotheyeverlearn.”

Mr Johnson briefed the cabinet at 2.30pm before continuing negotiations with the DUP, but by the time he had concluded his briefing of Tory MPs at 4.45pm there were growing hopes that the unionists could be won over.

In France, French president Emmanuel Macron declared that an agreement was “being finalised” and that leaders could be in a position to endorse it in Brussels on Thursday. Optimism surged though EU capitals that a deal was close.

Mr Johnson still needs the support of the DUP to be confident of winning a Commons vote on a Brexit agreement but the unionist party does not want to strike a deal until the very last minute. On Wednesday night it seemed determined to keep the prime minister waiting.