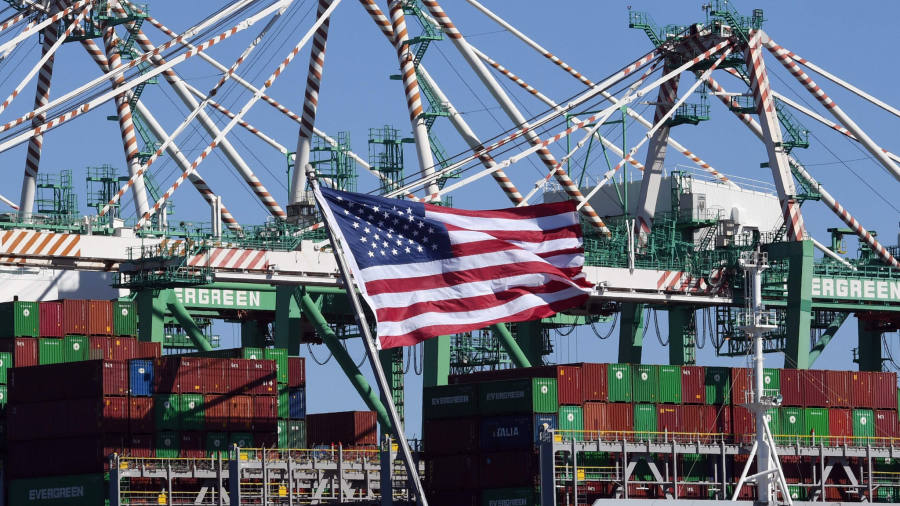 The pace of the US economy’s expansion has picked up in the back half of 2019, with data showing gross domestic product rose in the third quarter by more than initially forecast.

The economy expanded at a 2.1 per cent annualised rate in the three months ended September 30, according to the second estimate of GDP from the Bureau of Economic Analysis. That is up from an initial estimate of 1.9 per cent and an increase from the 2 per cent pace in the second quarter.

The new estimate, as well as data showing a bigger-than-expected rebound in durable goods orders in October, may help allay concerns about the health of the US economy, particularly manufacturing and business investment, which continues to be tested by the impact of Donald Trump’s trade war on China.

The upbeat data helped support US stocks, with the S&P 500 up 0.2 per cent on Wednesday morning from the previous session’s record closing high. The US dollar index rose by the same margin.

Data also showed orders for long-lasting manufactured goods rebounded in October from their steepest drop since May. Durable goods orders rose 0.6 per cent last month, easily topping Wall Street forecasts for a 0.8 per cent drop, and marking a solid recovery from the downwardly revised 1.4 per cent fall (previously minus 1.2 per cent) in September.

New orders for non-defence capital goods excluding aircraft, considered a proxy for business investment, surged 1.2 per cent, from an upwardly revised 0.5 per cent drop in September. Economists pencilled in an October decline of 0.3 per cent.

“The rise in durable goods orders last month was driven by a surge in orders for underlying capital goods, suggesting that business equipment investment is holding up better than anticipated,” Michael Pearce, senior US economist at Capital Economics said.

“Overall, we’re still expecting economic growth to slow further in the near-term, but that slowdown appears to be more modest than we had initially expected,” he added.

Price growth remained soft at the start of the fourth quarter even after the economy performed better than forecast, supporting the case for the US central bank to keep interest rates low.

The core personal consumption expenditures (PCE) index, which Federal Reserve officials use as their preferred inflation gauge and excludes volatile food and energy prices, was up 1.6 per cent year-over-year in October, according to the commerce department. That was down from the 1.7 per cent growth seen in the prior month.

The inflation reading “underlines that interest rates are unlikely to be raised again for the foreseeable future”, according to Andrew Hunter, senior US economist at Capital Economics.

“If economic growth slows as much as we expect it to, corporate pricing power is going to weaken, and core inflation is likely to again begin to decelerate,” Joshua Shapiro, chief US economist at MFR, said.

Household spending in October grew 0.3 per cent month-to-month on a seasonally adjusted basis, matching the consensus estimate in a Thomson Reuters poll.