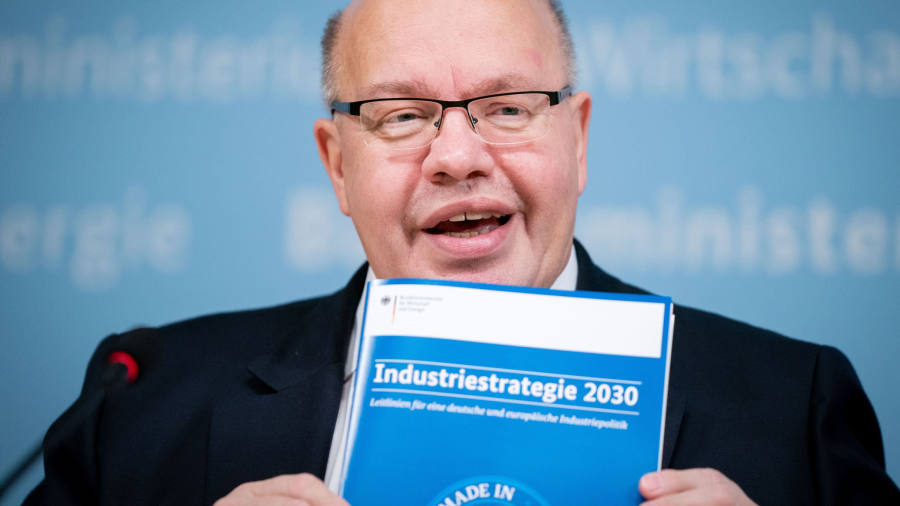 The German government will temporarily take stakes in high-tech companies to stop them being sold to investors in non-EU countries, a proposal by the economy ministry that underscores the growing protectionist mood in Berlin.

But the “national fallback option” unveiled by economy minister Peter Altmaier on Friday represents a marked retreat from an earlier idea for a state investment fund that would step in to pre-empt foreign takeovers of German companies.

That idea was slammed by business groups as unacceptable state interference in the free market.

He said ministers should be able to intervene whenever a non-EU entity tried to acquire a stake of 10 per cent or more in any German company involved in such areas as artificial intelligence, robotics, semiconductors, biotech or quantum technology.

Previously, the list was much narrower, covering only “critical infrastructure” such as electricity networks and IT security.

Mr Altmaier insisted he had no intention of “expanding the state sector”. “We don’t want protectionism, we don’t want to burden business, but we also want to avoid a clearance sale” of German companies abroad, he said. The national fallback option was a “last resort” that would only kick in if other safeguards did not work.

Even so, the reaction from business was negative. Eric Schweitzer, head of the German chambers of industry and commerce, criticised what he called a “creeping shift” towards a state-driven industrial policy.

The new strategy comes amid rising concern in Germany that its status as Europe’s strongest economy and an export champion could be at risk at a time of wrenching technological change and the rise of the platform economy in the US and China.

Fears for the future of Deutschland AG were fuelled this week by announcements of swingeing job cuts from its leading carmakers, which are struggling with the immense cost of shifting to electric vehicles. So far, the industry has signalled 50,000 job losses this year alone.

Germany’s fears of being eclipsed by China have grown since the emergence of the “Made in China 2025” policy, President Xi Jinping’s 10-year-plan to transform his country into a high-tech power dominant in 10 advanced industries.

German concerns deepened after the 2016 sale of Kuka, the country’s leading robotics group, to Chinese appliance-maker Midea, which fed fears China was seeking to hoover up some of Germany’s most cherished technical knowhow.

Since becoming economy minister last year, Mr Altmaier has pushed an industrial policy that business groups have criticised as excessively dirigiste. He is determined that Germany will become a leading manufacturer of battery cells for use in electric cars, a sector currently dominated by Asia.

To that end he has driven the creation of two consortiums, backed by €1bn in subsidies, that will produce batteries in Europe.

One involves the French carmaker PSA, its German subsidiary Opel, and the French battery-maker Saft, while the second includes BMW and the German chemicals group BASF.

The industrial strategy unveiled on Friday went beyond the issue of foreign investment. Mr Altmaier also demanded cuts in corporate tax, a capping of social security contributions for business, and lower energy costs.