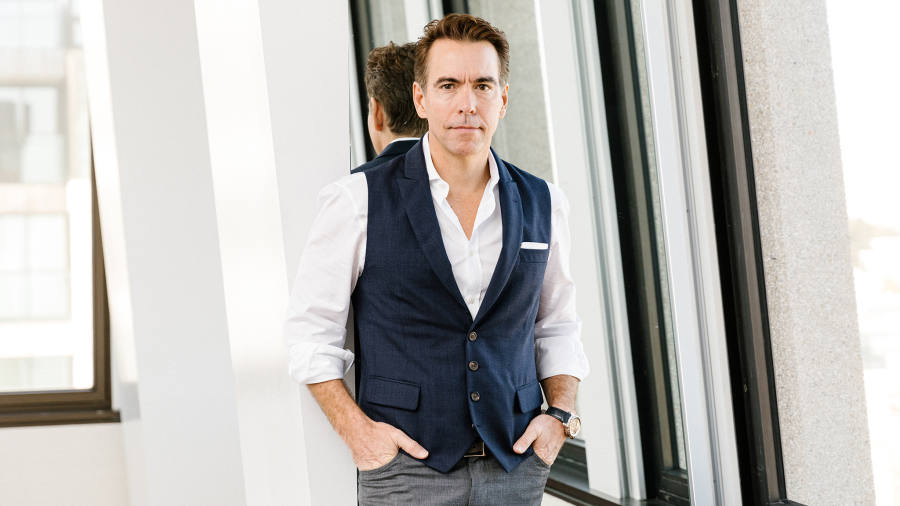 Orlando Bravo, the billionaire investor, is a good man to know in a hurricane.

As 155mph winds tore through his native Puerto Rico in 2017, local authorities struggled to move emergency supplies over storm-battered terrain to the communities where they were desperately needed.

Mr Bravo loaded his private jet with everything from granola bars to satellite telephones and flew them to the ruined island. “With a tiny operation we were able to make it from San Francisco,” he says. He later chartered larger aircraft and container ships to transport more supplies.

“We actually wanted to show that [we could do it],” he adds. If there’s a maxim that explains the decisions of the former Morgan Stanley investment banker — who co-founded software investment company Thoma Bravo at the height of the financial crisis in 2008 and is now braving Brexit with his first UK deal — it’s that in tough times especially, fortune favours the brave.

Mr Bravo unveiled a $3.9bn bid to buy the UK-based cyber security company Sophos little more than a fortnight before a Halloween deadline for the UK to leave the EU. Terms of the country’s departure hadn’t been announced, and no one could confidently say what would happen on October 31. Yet, at a moment of high suspense, Mr Bravo made his first foray into British dealmaking.

The strategy that has led Thoma Bravo to success — it topped a list of more than 500 private equity groups, ranked by performance, published by the business school HEC Paris and Dow Jones this year — “applies in any country at any time”, Mr Bravo says.

Since launching his investment career in 1998, the 49-year-old has made billions of dollars for investors by buying software companies cheap and pushing them to grow faster, while ripping out costs.

Two of his earliest bets went badly wrong. He bought the technology companies NerveWire and Eclipse Networks and brought in new managers to run them, but lost most of the money when the dotcom bubble burst. “It was really, really, really difficult,” he says. “We did a 180-degree turn, to say OK, we’re going to buy established businesses with existing management that has a record, and we’re going to work with them, instead of recreating the whole thing.”

Thoma Bravo’s approach is a far cry from a model that has become typical in San Francisco, where he’s lived since the mid-1990s, in which lossmaking companies use lavish venture capital funding to pay top dollar for highly skilled workers.

Thoma Bravo is “different in Silicon Valley” in that “we believe you can grow faster and innovate better the more money you’re making”, Mr Bravo says. The valley is starting to come around to his way of thinking, he believes.

“There are periods of time, like we have seen in the past five or six years, where investors are willing to fund costs that are far in excess of the value to society of producing that product,” Mr Bravo says. “Sometimes when people look under the covers they start questioning them” and “saying, the new thing we need to do is get profitable.” When they do, “the adjustment that is likely to happen is going to be a tough one.”

By the time Thoma Bravo buys a company, “something usually has happened”, he says, but “everybody makes mistakes,” and his starting point is that the existing management team must have “done something right” to get the business off the ground in the first place.

“Instead of throwing them away like maybe their VCs [venture capital backers] did or their corporate board did or their division did, or an activist may in some cases, we give them a chance to have somebody to learn from and partner with to adopt a different way,” he says.

There’s also a “playbook on metrics and processes, thousands of them”, he says.

But the thing “that’s special, that you cannot copy,” is the ability to squeeze better performance out of existing management teams, who often have a loyal employee base and knowledge of their customers, he says.

Thoma Bravo’s financial model, and that of the private equity industry as a whole, is under attack from the US Democratic party’s left flank. Democratic presidential candidate Elizabeth Warren’s provocatively titled Stop Wall Street Looting bill accuses buyout groups of loading target companies with “enormous debt loads” and stripping their assets. It would effectively outlaw the financial tools behind the leveraged buyouts that have become synonymous with the industry since the 1980s.

“It would be really bad,” Mr Bravo laughs, perhaps nervously. “These are really interesting times when some of the things that we would think of as basic could be challenged.” In response, he says, the industry “needs to do a much better job at describing the values that it’s been able to stand up to in terms of running these businesses”.

Mr Bravo, born to an affluent family, enjoyed what he calls a “soft landing” in the Ivy League at Brown University. He had planned to go to law school, but opted for “a crash landing” at Morgan Stanley instead, after a friend signed him up for banking interviews.

“It was really tough, the culture of the all-nighters,” he says. He decided “really early on” that investment banking wasn’t for him. But the job introduced him to “the best peers” such as Joe Baratta, now head of private equity at Blackstone, with whom he’s still “really good friends.”

Returning to Puerto Rico in the wake of disaster had a lasting effect on him. Frustrated by “deep inequality” and what he saw as a “huge, inefficient monopoly system,” he set up philanthropic programmes on the island, including one that supports entrepreneurs.

In part, it was a response to something that had troubled him deeply as he spent more time on the island where he’d grown up. There was a “lack of respect for the individual outlier, somebody that wants to do something different,” he says — people, perhaps, like himself. “I need to do something about that.”

Who is your leadership hero?

My grandfather Rafael Ayala. He was a risk-taker who had big goals. He spent his career providing healthcare to people in Puerto Rico who didn’t have access to it.

If you were not a leader what would you be?

First I’d be doing a lot of sailing and playing tennis. Then I’d work full time for my foundation, with the goal of developing a more equal society in Puerto Rico.

What was the first leadership lesson you learnt?

The gift of delegating. When you give talented people lots of responsibility they will usually exceed your highest expectations.