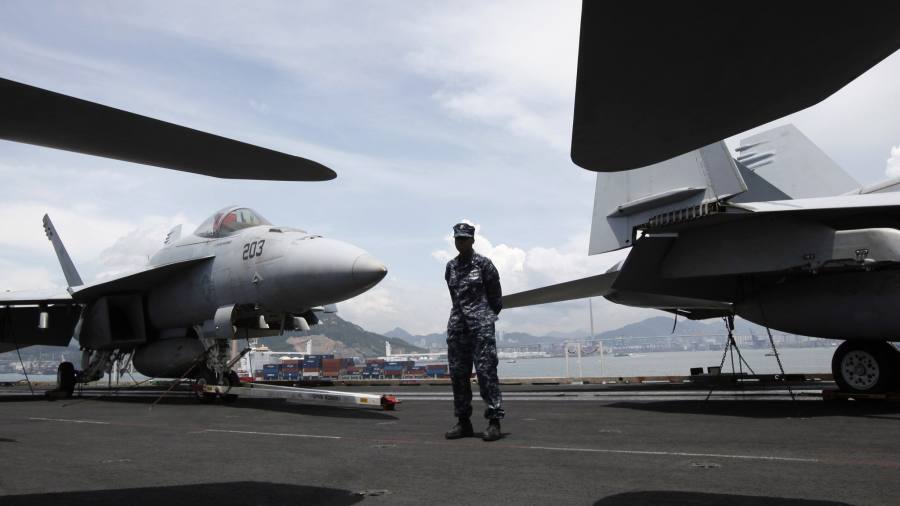 China will no longer allow US navy ships to visit Hong Kong, in a retaliatory move after President Donald Trump signed legislation supporting protesters in the territory.

The Chinese foreign ministry said it would suspend US navy port calls to Hong Kong, which must receive approval from Beijing. It also pledged to impose sanctions on four US-based non-governmental organisations, including Human Rights Watch and Freedom House, for what it said was their support for violent protests in Hong Kong.

China announced the measures after Mr Trump last week signed into law the Hong Kong Human Rights and Democracy Act, an overwhelmingly bipartisan measure that mandates annual reviews of the city’s political situation and could lead to sanctions.

“Beijing would like its people to believe that what is happening in Hong Kong is some kind of American plot,” Tom Cotton, a Republican senator from Arkansas and proponent of a tougher US stance towards China, said. “They can block all the port calls they want, but it won’t stop the people of Hong Kong from demanding their freedom.”

US aircraft carriers and other navy ships have made periodic visits to Hong Kong since Britain returned the territory to China in 1997. While China has on occasions refused permission, it has not previously announced an indefinite ban on such port calls.

Bonnie Glaser, a China expert at the Center for Strategic and International Studies, said the move was significant because China had never issued a blanket ban. “It is unclear whether and how the decision could be reversed. But there isn’t any substantial impact other than the US navy losing a great place for R&R.”

Ms Glaser added that the Chinese move could lead to calls from US lawmakers for the US navy to make port calls in Taiwan — which would further antagonise Beijing.

It was not clear how Beijing could sanction the human rights groups since none are registered as NGOs in China.Chinese state media has consistently accused foreign organisations of inciting protesters in Hong Kong — reports that are widely believed in the mainland.

The Chinese move came as the Hong Kong government said the territory would probably record its first fiscal deficit for 15 years in 2019/2020. It also announced that retail sales fell 24 per cent in October from a year earlier, in a sign of how months of anti-government demonstrations have damaged the local economy.

The retaliation came one day after tens of thousands of protesters returned to Hong Kong’s streets and clashed with police following a week of calm after the pro-democracy camp’s landslide victory in recent local elections.

On Sunday, a peaceful march in Tsim Sha Tsui, a shopping district, descended into chaos as the police fired tear gas into the crowd. Black-clad protesters vandalised mainland China-linked shops and police responded with more tear gas and rubber bullets.

Paul Chan, Hong Kong’s top financial official, said Hong Kong was “facing an extremely challenging internal and external environment” and that it would be “cautious to ensure proper use of financial resources and maintain a sound financial situation”.

Hong Kong’s economy fell into a recession for the first time in a decade during the third quarter of the year because of the effects of the unrest and the US-China trade war.

The city is usually known for running blockbuster government surpluses, the most recent of which came in at HK$58.7bn ($8.3bn) for the 2018/2019 fiscal year. The Hong Kong government in April forecast a surplus of HK$16.8bn for the current fiscal year.