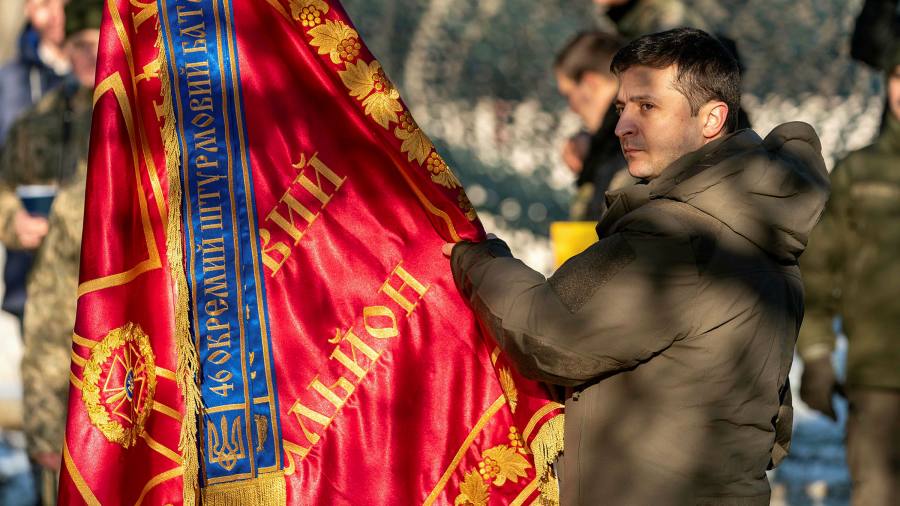 After months of haggling about dates and the agenda, the “Normandy Four” summit meeting between Germany, France, Ukraine and Russia has finally been set for December 9 in Paris.

French president Emmanuel Macron in particular had been pushing for the meeting to “advance efforts for a peaceful resolution to the conflict in eastern Ukraine”. Surprisingly, Ukraine’s president Volodymyr Zelensky was also interested in the meeting. He believes that face-to-face contact with Vladimir Putin can contribute to resolving the military conflict with Russia.

In view of the prevailing mood in Paris and Berlin regarding Russia and Mr Putin’s unchanged policy, however, the summit offers great risks for Ukraine, as well as for western Europe.

The last time the four countries met at the level of heads of state and government was in October 2016. Since then, no progress has been achieved in implementing the protocols signed at the meeting in the Belorussian capital Minsk in February 2015, an incoherent mix of exhortations to Ukraine, Russia and the “separatists” it supports without a clear time-table.

The first measures to be taken were a ceasefire and the withdrawal of heavy military equipment from the front lines. So far, a lasting ceasefire has not occurred. Ukrainian soldiers and civilians continue to be killed.

Mr Macron’s push for the summit follows on from his belief that the European Union must find a “rapprochement” and “common ground” with Russia. However, his recent initiatives reveal a worrying neglect of the manifest threats that Russia poses to western Europe.

In February 2014, Russia forcibly annexed Ukrainian Crimea, the first expansion of national territory by military means since the end of the second world war. Subsequently, Russia stoked unrest in eastern Ukraine, arming local “separatists” and eventually sending in its military, which is still there.

Russia refuses to withdraw troops stationed in eastern Moldova and continues to occupy large parts of Georgia. A Russian BUK missile downed Flight MH17 and Russian officers were involvement in a failed coup in Montenegro. Moscow intervened in the Macedonian referendum regarding the renaming of the country, brazenly poisoned EU citizens on EU territory and continues its campaigns to influence European public opinion.

These are real threats to the democratic, rule-of-law societies in which European citizens wish to live.

Nevertheless, in June, France, joined by Germany, actively pushed for Russia’s unconditional return to the Council of Europe. In the process they even acquiesced to Russian demands that the council virtually give up its right to sanction member countries when they violate its democratic principles. Mr Macron’s hosting of Mr Putin just before the G7 summit in France in August offered the Russian president a picture-postcard opportunity to show on Kremlin-controlled TV channels how well he is received in the West, without having to give anything in return.

Another worrying sign of Mr Macron’s naïveté or ill-judged “realism” was his “positive appreciation” for the exchange of Russian and Ukrainian prisoners in September. Not a word that, as independent Russian observers pointed out, the Ukrainian “prisoners” were in effect hostages. The same applies to Macron’s welcoming of Russia’s return of three Ukrainian warships it had confiscated, which he said would “help to increase confidence in the dialogue between Russia and Ukraine”. Not a word about a UN maritime tribunal’s ruling that Russia had acted illegally and should have returned the ships and their imprisoned Ukrainian sailors immediately.

At the German end, things do not look better. Since her decision not to stand for re-election Angela Merkel is a lame-duck chancellor, weakened in her own party and less able to withstand pressure to improve relations with Russia. Moreover, she is in a coalition with the Social Democrats who have pushed even more strongly for a normalisation of relations with Russia.

The gestures Mr Putin has made so far have cost Russia nothing and given it positive PR. Independent observers in Russia stress that his recent “positive” moves in no way imply a change of policy towards Ukraine.

Thus the risk is real that in order for the Paris summit to become a “success” from a Franco-German perspective, Mr Zelensky will come under great pressure to be “reasonable” and to agree to compromises that will lead to “lasting peace”. In practice, this could mean him being forced, as a first step, to agree to elections and greater autonomy in Russian-occupied Ukraine, without first regaining control over his country’s 400-kilometre border with Russia; and without guarantees that Russian troops will leave or that the “separatists” they support will be disarmed.

Mr Zelensky has approached the summit with surprising confidence. Yet his foreign policy team is inexperienced. From the beginning, it has issued confusing statements about Ukraine’s objectives for the meeting, which are still not clear.

The crucial question is whether Mr Zelensky will have the will and the strength of character to withstand French, German and Russian pressure. He runs the risk of being painted by the other participants as being responsible for the summit’s failure. Will he refuse to accept “compromises” that go against Ukraine’s interests as a unified state with control over its own borders and without the presence of foreign troops?

Willem Aldershoff is an independent analyst of international relations and a former head of unit at the European Commission.

beyondbrics is a forum on emerging markets for contributors from the worlds of business, finance, politics, academia and the third sector. All views expressed are those of the author(s) and should not be taken as reflecting the views of the Financial Times.