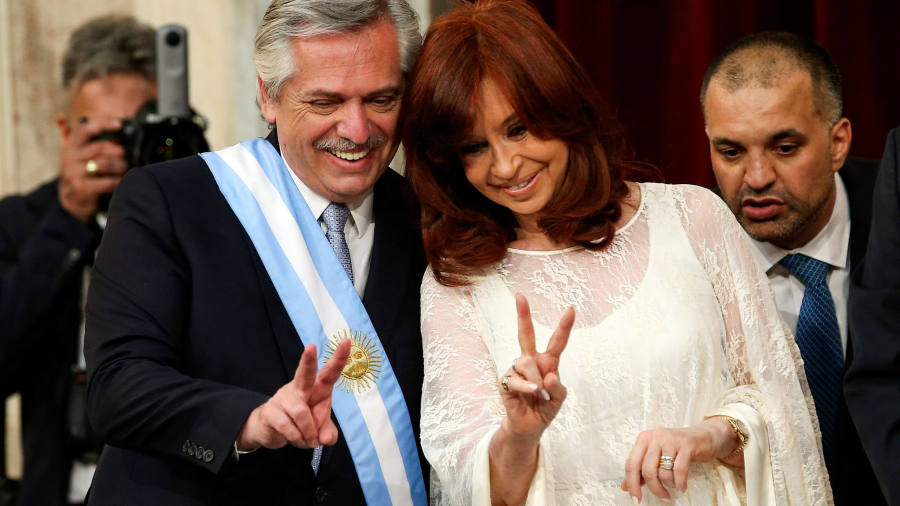 Alberto Fernández was sworn in as Argentina’s new president on Tuesday, marking a historic return to power for the leftist Peronist movement amid a looming sovereign debt crisis and a deep recession.

Mr Fernández, who becomes the fourth Peronist president to rule Argentina since the return of democracy in 1983, is facing the urgent challenge of staving off the country’s ninth sovereign debt default after a currency crisis last year that led to a $57bn bailout from the IMF.

“The country has the willingness to pay, but it lacks the capacity to do so . . . In order to pay [the economy] needs to grow first,” the 60-year-old lawyer said in an hour-long address to congress, drawing applause. The outgoing president, Mauricio Macri, who earlier hung the presidential sash on Mr Fernández, had “left the country in a situation of virtual default”, he added.

Mr Fernández, who drove his own car to congress flashing a victory sign to elated supporters on the streets, promised a social pact to address poverty levels approaching 40 per cent. He said that the implementation of “a plan to fight against hunger” would be his first action as president.

He also pledged thorough judicial reform, declaring that “without an independent judiciary there can be no democracy”, and that there had been “undue persecution and arbitrary imprisonment” in recent years. Looking on approvingly beside him was his vice-president, Cristina Fernández de Kirchner, who was Argentina’s president from 2007 to 2015 and faces a series of corruption charges.

The left’s return to power in Argentina comes at a time when most other countries in the region are run by centrist or rightwing leaders, with the notable exceptions of Andrés Manuel López Obrador in Mexico, Nicolás Maduro in Venezuela and Miguel Díaz-Canel in Cuba. Of them, only Mr Díaz-Canel attended the ceremony on Tuesday.

With many countries in Latin America in crisis, there were few regional presidents present. Of Argentina’s neighbours, only the presidents of Uruguay and Paraguay travelled to Buenos Aires, while Brazil’s hard-right president, Jair Bolsonaro sent his vice-president, Hamilton Mourão, instead. Chile’s Sebastián Piñera cancelled his trip after a Chilean military aircraft carrying 38 passengers went missing on its way to Antarctica on Monday night.

In his address, Mr Fernández pledged to strengthen the regional trade bloc Mercosur — in spite of his “personal differences” with Mr Bolsonaro — as well as the country’s claim to the Falkland Islands, which are known as the Malvinas in Argentina.

Peronist supporters, including trade unions and social organisations, filled the square outside the neoclassical congress building in Buenos Aires, beating drums and carrying banners that celebrated the reunification of the movement that has dominated Argentine politics for the past seven decades.

Mr Bolsonaro, who has called Mr Fernández a “red bandit”, finally backpedalled on his earlier decision to neither attend nor send a cabinet member to the Argentine’s inauguration, in what would have been the first such absence in the inauguration of an elected Argentine president since the country’s return to democracy. Instead he opted to dispatch the pragmatic Mr Mourão.

“I see it as a political gesture of goodwill with the new Argentine government,” Mr Mourão told local media. Brazil is Argentina’s main trading partner. Earlier, Mr Bolsonaro told reporters that when he took over as president in January, “I didn’t invite some authorities either. And our trade with Argentina is still the same. No problem, it won’t interfere with anything.”

“It is true that the country needs to grow again, but through what instruments? You run the risk that you may see growth but it is low quality and not durable growth,” said Alberto Ramos, head of Latin American economics at Goldman Sachs. “How do you fund a larger fiscal deficit without access to voluntary debt markets and a relationship with the IMF that is estranged? . . . [T]he reason why they are in this situation today is because of a large fiscal deficit.”

“It is obviously an encouraging sign that he has not really taken a hard stance on the IMF . . . but having said that, with the plans he has laid out about increasing subsidies, tax cuts and generally high public spending, it is hard to see how the IMF would be on board with all of those proposals,” said Nikhil Sanghani, an economist at Capital Economics.

“It is difficult to see how bondholders would be able to negotiate a new plan without credible policies from Fernández . . . the fact that you see bond prices around distressed levels suggests they are sceptical about what he and Martin Guzmán have been saying.”