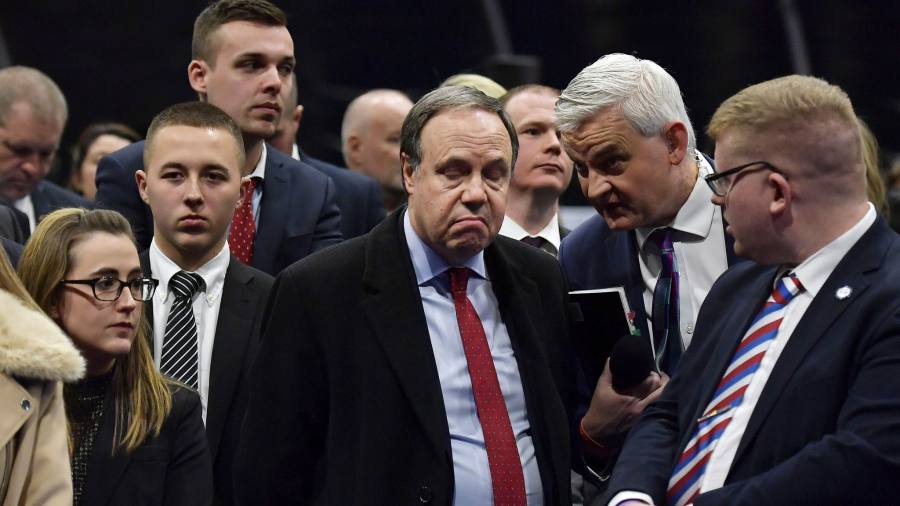 The Democratic Unionists suffered a severe setback at the election, losing two seats, including the one of its leader in the House of Commons Nigel Dodds, as nationalist parties overtook unionists as the region’s largest group at Westminster for the first time.

Voters in Northern Ireland, which voted to Remain in the EU referendum in 2016, punished the DUP for providing support to the Conservative party over the past two years. Nationalist parties have taken nine of the region’s 18 seats with the Social Democratic & Labour party returning to Westminster with two MPs, having lost all three of its seats in the 2017 election.

Sinn Féin, which does not send its MPs to the House of Commons, held on to seven seats, after a narrow win — by 57 votes — in Fermanagh and South Tyrone over the Ulster Unionist party, which once again failed to win any seats.

The loss of two seats in Belfast left the DUP holding only the unionist stronghold of Belfast East in the city and a total of eight MPs.

Mr Johnson’s thumping majority means the prime minister has no need for the DUP as he drives the Brexit deal it had previously rejected through the House of Commons.

The outcome stands in sharp contrast to the outsized Downing Street influence the party gained after the 2017 election when Theresa May turned to its 10 MPs to support her minority government — a fateful arrangement that hastened her demise when the party dismissed her proposals to keep open the Irish border after Brexit.

The pro-Brexit DUP was at the centre of bitter Westminster wrangling over Brexit that increased the risk of a disorderly UK crash out from the EU, which would have damaged Northern Ireland’s economy and the 1998 Good Friday peace pact that ended decades of sectarian conflict.

Such concerns spurred the SDLP to stand aside and give John Finucane of Sinn Féin a clear run against Mr Dodds in north Belfast, where the nationalist won by a majority of just under 2,000.

Similarly, Sinn Féin did not contest Belfast South allowing Claire Hanna of the SDLP to beat the DUP’s Emma Little Pengelly by more than 15,000 votes. Arlene Foster, the DUP leader, reacted bitterly to the pact early on Friday morning saying “the pan-nationalist front has come to fruition again.”

The DUP also failed to take the North Down seat vacated by Sylvia Hermon, the independent unionist who stepped down before this election. Instead it went to the cross-community Alliance party, which had a good night, taking the third largest vote share of any party in the region, up almost 9 points to 16.8 per cent on 2017.

Analysts said the outcome leaves the DUP with little choice but to seek to drive the region’s political agenda and its response to Brexit by reviving the power-sharing regional government at Stormont with Sinn Féin that collapsed three years ago. Efforts to bridge the gap between the parties — made more difficult by their divergent Brexit views — resume next Monday.

“[The DUP] need a power base now — and the only power base available to them anywhere in the UK is the Northern Ireland assembly. So they will have a price to pay for that, but yes, I think they reluctantly will have to find a way out of the present mess,” said Alex Kane, a commentator who formerly worked for the Ulster Unionist party.